Cichoria!: Italianize your Farm and Round Out your Season with Bitter Sweet Chicories

Umami is not the only neglected flavor to resurge mainstream taste as of late. Amaro has recently become a household word and we can thank the often chicory-infused Italian liqueurs for giving bitter its trendy new platform. Not only does every restaurant menu in New York City now feature a variation of a chicory salad, but every dive bar mixes a negroni and every Whole Foods carries radicchio di Treviso. Stunning crimson colored chicories are making their debut as more growers and chefs recognize their value. 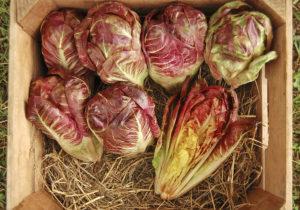 I like to think of chicories as a great ambassador to ‘italian-ness,” a culture that embraces the idea that even the sweetest parts of life are often a little bit bitter. Anthony Bourdain described Southern Italy best as “raw, alternately charming and savage,” a wonderful analogy for the slightly confused, pleasantly surprising, and delicious quirkiness of chicory.

Originally from the Northeast, you’ll find variations all the way South from Rome to Puglia, where one of the best meals of my life featured wild chicory foraged from abandoned olive groves. Though more unusual varieties like puntarelle haven’t peaked yet here, High Mowing Organic Seeds carries not one, not two, but five different varieties of Chirocium to try out here!

Italians are bred to love bitter, but bitter appreciation doesn’t come naturally to most. Our instinctive aversion to it has a historic role Brad Thomas Parsons describes in Amaro: The Spirited World of Bittersweet, Herbal Liquors as “a genetic predisposition to avoid bitter. Years of evolution have us hardwired to treat anything bitter as a potential toxin”. So why then grow these wildly obscure and inherently Italian crops? 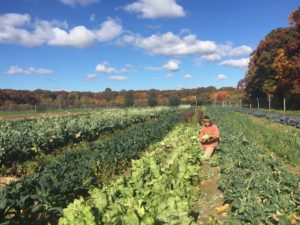 At The H.O.G. Farm in Brookhaven, NY (zone 7a), Sean Pilger rounds out his CSA shares, farm stand and restaurant wholesale offerings with several varieties of chicory. “We grow different varieties at different times of year to reflect their preferred growing conditions. Frisee in spring, escarole in the heat of summer, radicchio and [sugarloaf] varieties in the fall,” he explains. They grow radicchio and frisee as heads, starting seeds in trays about 4 weeks before transplanting into beds prepped and fertilized the same as kale, chard, fennel or lettuce. They transplant seedlings into 3 rows at 12” spacing, which makes for easy basket weeding and quick hoeing.  Sean plants successions of frisee about every 3 weeks in the spring, which rounds out spring CSA offerings. The light green, tight romaine head-like varieties, like Virtus F1 can be planted throughout the season, but Sean has found that they taste extra sweet in the fall after a frost kiss.

Sean loves their “scrappy, wild Italian heritage” and “their medicinal qualities of detoxification and liver stimulation.” Tight purple heads speckle the farm stand with color and fly off the shelves at a price almost 2/3 higher than kale or lettuce heads. Customers’ initial hesitant inquiries quickly turn into hungry curiosity after Sean shares his recipes. “I love all the different recipes that involve chicories. They’re super versatile: raw, sautéed, grilled, in soups and pastas.” Every last head of radicchio is harvested for their weekly restaurant delivery into Brooklyn.

You can also grow chicories as more of a cut-and-come-again green used in salad mix. Hannah and Ben Wolbach of Skinny Dip Farm in Little Compton, RI (zone 7a) grow chicories this way year round in an unheated high tunnel. They’re an important component of their salad mixes in the cooler months, especially November-December and March-April when lettuces have not done as well for them. They transplant in the fall at 5 rows per bed (30” bed size) and tight, 2.5” in-row spacing. “We're not really doing a succession in the fall/winter. Just plant once and keep picking. The plants seem to be very long lasting and keep cranking out leaves.” The Wolbachs also transplant radicchio into the field under row cover in September for steady harvest into December, picking up again in February. “We find that radicchios are the most cold hardy. They overwinter quite successfully in the field under row cover. Frisee types, endives and escarole do well in the high tunnels.”

Selling chicories at market is easy when you offer a simple rule of thumb I’ve adapted from most Italian recipes: always pair with fat (anchovies, pancetta, gorgonzola, nuts), acid (oranges, vinegar, lemon) and sweet (aged balsamic, figs, peaches). As a grower it’s also smart to offer chefs products that offer something special and are more difficult to find fresh. Chicory is one of them and chefs go crazy for it. Ben Sukle, Chef and Owner of Birch and Oberlin in Providence, RI thinks “bitter is underutilized. Bitters also take on all the other flavors better. Nobody wants sweet with a Ceaser dressing. They want bitter!” Give the people what they want! Go ahead, be bitter about it. 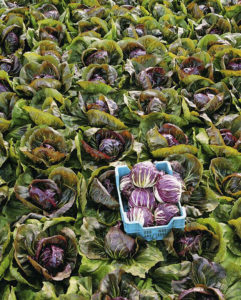 Chicory varieties you can get from High Mowing Organic Seeds:

Cristina Cosentino lives and farms in Rhode Island. Her home “farmily” will always be at The HOG Farm in Brookhaven, NY, where she spent several seasons. Photos courtesy of the author.