Garlic the Traveler: From Origins to Global Cultivation 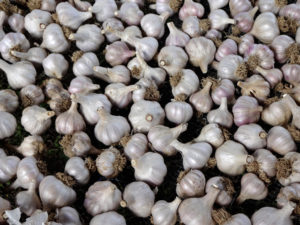 When it comes to the origins of seeds, it is remarkable to think about how one plant, native to one region, made its way into gardens across the globe.  Garlic, originating in Central Asia, is one such traveler and through its dynamic relationship to human beings throughout time has gone from an isolated population that spanned an area encompassing parts of China, South to India, West to Egypt, into the Northern territories of the Ukraine, to a staple crop grown all over the world.  From this center of origin, all of the genetic diversity that has been responsible for the 10 major types and over 450 different cultivars remains today and many breeders return to Central Asia to collect seed to develop new genetic variations.

The garlic sold for planting is sold as cloves, which act as clones of the parent plant.  True seed is produced at flower and this is commonly seen in hardneck varieties with the development of the garlic scape.  Today, true wild garlic (Allium sativum) can be found in Kyrgyzstan, Tajikistan, Turkmenistan, and Uzbekistan.  The wild garlic (Allium vineale) commonly foraged and often considered a noxious weed in the United States is actually in the onion family.  In 2003, DNA analysis determined that garlic could be classified into 10 different types.  The 10 different types have evolved into the over 450 unique cultivars through their travels with human beings into varying ecotypes.  As cloves were planted from parent plants in diverse climates and regions, plants began to adapt to the conditions and variables present in each location.  These variables, such as soil type, altitude, fertility, rain fall, and the conditions endured during winter, developed different attributes in saved materials.

Garlic is considered one of the oldest cultivated crops grown by human beings.  With over 5,000 years of development, garlic was grown in every major ancient civilization.  The fact that garlic can be pulled and cured made the clones easy to transport and they found their way into Ancient Egypt, Rome, Greece, India, China, and even on the ships of the Vikings.  As the plant is able to reproduce both sexually through seed, and asexually through cloves, the dispersal and viability of the plants was safeguarded by the plant's own adaptations.  Garlic is a hardy crop known to repel certain pests and has high resistance to disease. The plants are tolerant of many varying conditions, which allows them to establish in different territories easily and successfully.  Each different civilization began to utilize garlic in different ways and garlic became very important culturally as medicine, during spiritual ceremonies, and even as an aphrodisiac.

It is likely that garlic got its reputation as powerful spiritual medicine, capable of warding off evil spirits, stopping infectious disease at the door frame, spooking vampires, and repelling ghosts from its well documented healing properties.  Garlic contains volatile sulfur compounds that are responsible for its antiseptic and antibacterial qualities.  In 1858 Louis Pasteur, a French chemist and microbiologist whose work greatly influenced the development of medical microbiology, determined that these sulfur compounds could effectively kill bacteria.  From his observations, one millimeter of raw garlic juice was as effective in killing harmful biology as 60 milligrams of Penicillin.  This positive attribute of the garlic plant is so pronounced that during WWII, both British and Russian soldiers used diluted forms of garlic to treat wounds and gangrene.  Doctors of the time referred to garlic as "Russian Penicillin." 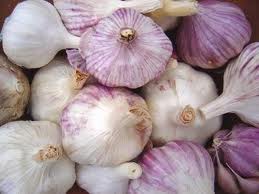 Brought into the United States in a limited capacity by Italian, Polish, and German immigrants, garlic wasn't introduced into mainstream cultivation until the USDA was able to enter the former Soviet Union in 1989 and follow the old Silk Road, collecting specimens to be grown by contractors in the States.  As the contractors planted the garlic, they began selling and trading their cloves to other producers and garlic became a mainstay of gardens across the United States.  To this day, there is no known record of what flora or fauna could have been introduced to the United States, traveling into the country on the roots of the Russian garlic cultivars.

In 2015, the world population of garlic was estimated at 25 million bulbs and China was identified as its top producer accounting for 80% of that production.  In the United States today, California is the biggest producer of garlic making up 90% of the market.

Garlic on a Human Scale

Though garlic, with its popularity and easy production, is commonly adapted to grow in large scale, mono-culture operations, garlic is also widely grown on small sustainable and organic farms and can be found in backyard gardens in every state.  Garlic is often inter-planted with other crops as a companion to deter pests.  Cloves are planted in the fall to overwinter and harvests of mature garlic generally begin in early summer.  Garlic can be harvested at any stage and the entire plant is edible.  For more information about planting garlic, site selection, and choosing a variety for your region, check out this great blog article on our website.

In the early 1990's, farmer and author Ron Engeland, proposed that garlic be separate into two major subspecies.  The two groups were divided based on the plants tendency to go to flower.  The hardneck vs. softneck classification was born, with roots of this distinction dating back to its first cultivation in Southern Europe.

Hardneck varieties produce a garlic scape that unfolds into an edible flower at sexual maturity.  When plants reach full maturity and are preparing to go dormant for the winter season, the flower develops into bulbils that can be planted, just like the cloves.  Often growers choose not to plant bulbils as the plants that grow from these materials are variable in size and quality, unlike the clones which are usually true to the plants from the previous season.  There are many theories and methods when it comes to growing garlic, but many people who grow hardneck varieties remove the scape during production to concentrate the plant's efforts towards developing large cloves.  Garlic scapes are edible and are often desirable additions to market tables and sought out by restaurants for their mild and somewhat sweet, garlic flavor.  Hardneck garlic has larger cloves than softneck varieties and generally offers something between 4-12 cloves per bulb.  Hardneck varieties are favored in colder climates for their winter hardiness, but have adapted to many different regions.

Softneck varieties are one of the most common grocery store garlic types and generally have larger bulbs.  The bulbs tend to have significantly more cloves than hardneck varieties, sometimes numbering  8-20 cloves per bulb.  It is thought that the additional cloves are a safeguard by the plant to reproduce as softnecks rarely produce flowers.  If softnecks do produce a flower, it is generally due to stress and will often times be malformed or appear within the bulb itself.  Softneck garlic is favored in warmer climates and stores very well, maintaining its integrity for up to 12 months in ideal storage conditions.

Here at High Mowing, we offer a diverse selection of what we feel are some of the best, most widely adapted garlic varieties for use in production and backyard cultivation.  Below is a list of our varieties and highlights of some of their best attributes.

Rocamboles are some of the most widely known hardneck varieties.  They have what is considered "true garlic flavor" and loose skins that make them easy to peel when cooking. 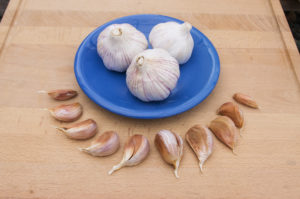 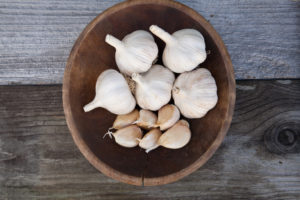 Loved by chefs for its seductive depth of flavor and ease of peeling. 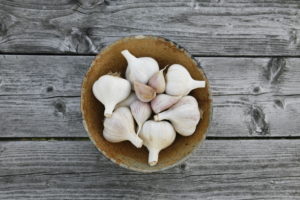 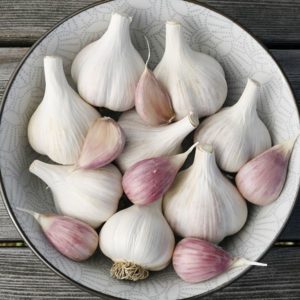 A large, beautiful variety that is easy to grow! 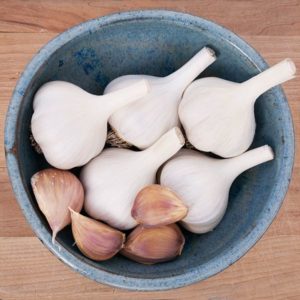 These hardneck varieties offer a beautiful purple coloring on the skins of the cloves found within the garlic bulb.  Grown in many different climates, these varieties often win taste test competitions for their flavorful and aromatic nature. 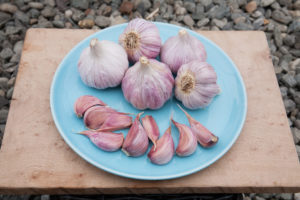 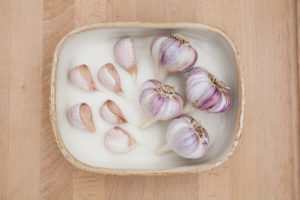 These softneck varieties offer the longest storage capacity of all of the garlic types.  These high yielding varieties are acclimated to many different climates.  They are very popular for those interested in making garlic braids. 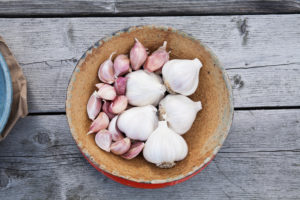 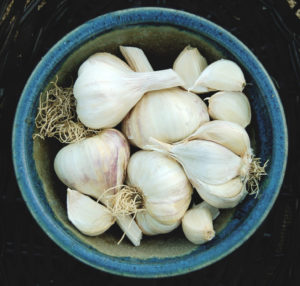 Award-winning flavor is robust and rich with a hint of heat. 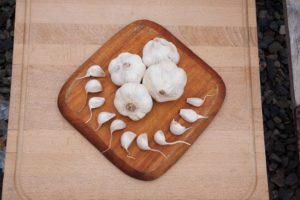