Dry seeded crops are quite easy to grow, clean, and save.  On High Mowing Organic Seed’s Production Farm, we produce multiple species and varieties of dry seeded crops each year.  As always, we are happy to disseminate all information about our seed growing and saving techniques.  To positively impact your community and local food supply, we encourage you to engage in saving, producing, and breeding vegetable seed.

What are “Dry Seeded” Crops?
Dry seeded crops are those plants with seeds that are usually housed in a pod, capsule, or seed head.  Dry seeded crops are a great introduction to saving seed.  The crops are mostly easy to grow and are easy to process and clean.  At High Mowing, we produce seed at various scales the following dry seed crops: onions, corn, beans, but mostly what we focus on is Brassicas (mustard greens, broccoli).

To better understand what it means to grow and harvest a dry seeded crop, we’ll follow Ruby Streaks mustard, a popular variety of mustard green, from seeding to processing:

Seed to Seed
We start our dry seeded crops in the greenhouse in early April.  Ruby Streaks is seeded into 72-cell trays and started in the greenhouse for around three weeks.  Once outside temperatures have begun to hover around 27°F at night we move them outside to harden them off and to induce vernalization (read our related blog post about vernalization).  Plants harden off/vernalize for a week or more and then are transplanted into the field at 18-24” between rows and 4-6” spacing within the row.

The Process of Roguing Before crops flower and begin to set seed, we rogue (remove plants that do not exhibit the characteristics we want within the plant population).  Roguing keeps a variety pure.  In a population of thousands of plants there can be some genetic variability, even within very stable open-pollinated varieties.  To maintain a pure line, we cull plants that exhibit variations from the desirable traits.  Ruby Streaks plants must exhibit a strong purple color at a young age and have a jagged leaf.  With Ruby Streaks, the first round of roguing occurs while the plants are still in the greenhouse, a second time when we transplant, and then lastly before they begin to flower, always looking to remove any plants that do not possess expected characteristics.  We want undesirable genetics removed from the plant population before pollination starts!

Crop isolation is critical in seed production to maintain pure seed crops.  Some crops, such as corn, cross-pollinate easily, and need a distance of up to a mile and half to maintain pure strains.  Other dry seeded crops like beans and lettuces don’t cross pollinate readily, and don’t require large isolation distances.  We keep Ruby Streaks isolated by a half mile from other Brassica juncea crops such as Golden Frill mustard, which we also grow for seed here.

Another important thing we keep in mind is that some wild plants can cross with cultivated plants, for example, Queen Anne’s lace, will easily cross with any cultivated carrot variety as they both belong to the species Daucus carota.  Raphanus raphanistrum (wild radish) grows along edges in our production fields—and throughout New England—and will cross with domesticated radish seed crops.  A population of wild relatives within crossing distance can ruin a seed crop.

After the Ruby Streaks crop has flowered and had thorough pollination, plants will begin to set seed pods.  Immature seed pods are green but as the plant ages, the seed pods will begin to dry down and turn brown.  We check for maturity by pulling off some of the pods and rubbing them between our hands.  If the pods easily split and the nice hard round seeds can’t be ground between our fingers, the seed is mature and ready to harvest. It is important to allow at least three no rain, sunny days before harvest, if at all possible.

For basic dry seed harvesting we use the following tools: 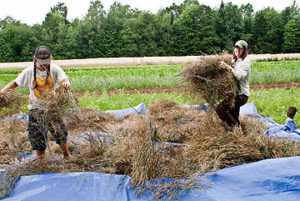 Harvesting the Crop:  We always make sure the tarp is clean.  Brassica seeds are small and love to hide in the seams and patches on tarps.  Lay the tarp on the ground next to your seed crop.  Cut the plants at the base and throw the stalks on the tarp.  Pile the stalks uniformly with the cut end facing the tarp’s edge.  If it is a large crop all stalks may not fit on the tarp.  We usually have multiple tarps staged at different points within the crop.

Initial Thresh by Foot:  Once all stalks are on the tarp or the tarp is full, we fold the tarp like a 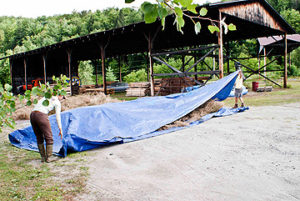 burrito, making sure the ends are shut, and take our shoes off and walk or jump on the tarp.  This part of the process is a crew favorite.  Dried Brassica pods will shatter underfoot, with seeds falling on the tarp.  We unfold the tarp and redistribute the Brassica stalks evenly across the tarp.  This can be done quickly with a pitchfork or stick.  We are careful not to poke any holes in the tarp.

Secondary Threshing by Truck or Flail: At this point, the tarp will have lost some of its height and will be able to be driven over.  Yes, driven over! We prefer a 4x4 pickup that sits a little 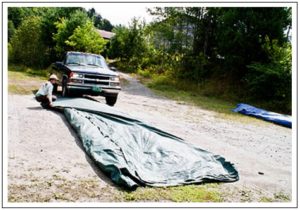 higher off the ground.  This requires the underside of the truck to be clean.  This is especially important if different crops are processed.  We use compressed air and give a thorough spray to the undercarriage.  Seeds love to hide in the frame rails of the truck.  In the lowest gear, we slowly drive over the crop, taking a tire width each time.  While driving, there is an audible snap-crackle-and-pop of the pods bursting, releasing the seed.  After three passes over the whole tarp, we visually inspect the seed pods.  If 50% or more are unbroken, we continue to drive over the crop.

If you don’t have a pickup available you can use a flail.  Flails are extremely easy to make.  All you need are two 6 ft. hoe handles, cut one in half, drill a hole in the handle end of each.  Tie each handle together with a short piece of rope and start swinging.  Substitute the flail for the truck after walking on the tarp for the initial shattering.

At this point, the majority of seed should have been separated from the pods and stalks.  We inspect the stalks and pods.  If a high percentage of pods remain unopened, we consider driving over/flailing again.  However, unopened pods may be moldy or contain immature seed, if this is the case, it may not be worth the time to process the crop again. Separate the Stalks and Chaff: The stalks are moved to one side of the tarp.  The separated seed and chaff is swept to the center of the tarp and sieved through a black plastic vegetable crate.  The seed falls back onto the tarp.  We discard the stalks and chaff in the field.  At this point, we gather all seed to the center of the tarp, bunch the tarp, and load the tarp with the seed into the pickup and head to the warehouse for further processing.  We sift the Ruby Streaks seed through a screen, and discard the chaff.  We do this several times, with different sized screens to try to remove as much chaff as possible.

Winnowing: Next we winnow the seed by setting a box fan on a chair, and three thoroughly cleaned totes on a tarp in front of the fan.  We like to fill a square five gallon bucket with the screened seed, which allows the seed to pour evenly.  We shake the seed out slowly and evenly in front of the fan, adjusting the speed as necessary.  The heaviest, nicest, most viable seed should fall into the 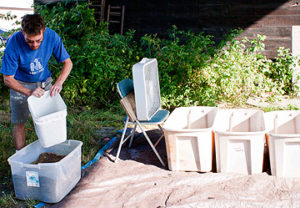 first tote, while the chaff and less viable seed should be blown into the next two totes.  We winnow the seed at least twice, sometimes as many as four times.  We keep the contents of each of the three totes separate and winnow each tote individually as seed quality and cleanliness will generally decrease with distance from the fan.  Ruby Streaks seed, once winnowed, should have a nice matte purple/magenta color with some seed being darker than others.  All seed should be hard and nicely rounded.

This process can be more or less used for most dry seed harvesting, with some variation.  There are a few exceptions, such as corn, however.  To get more specifics on seed saving for other crops, check out these great resources: