In Vermont and across the country, climate change poses increasing challenges for farmers: flood and drought, unpredictable weather, increased pest pressure and new strains of diseases. At the same time, the agricultural sector is a leading cause of the greenhouse gasses that lead to climate change. It doesn’t have to be, though. Just as the organic movement has offered an alternative to industrial agriculture, the Regenerative Agriculture movement is growing with the goal of reversing climate change altogether.

The key to regenerative agriculture is that it not only “does no harm” to the land but actually improves it, using technologies that regenerate and revitalize the soil and the environment. Regenerative agriculture leads to healthy soil, capable of producing high quality, nutrient dense food while simultaneously improving, rather than degrading land, and ultimately leading to productive farms and healthy communities and economies.

I first came upon this movement thanks to livestock farming friends, who could draw a clear line between grazing animals and growing soil. As ungulates graze, they spread manure and aerate the soil, while poultry scratches at the upper layers of soil, helping integrate nutrients as they go. After grazing, the pasture regrows with the nutrients from the manure, and pulls carbon from the air, sending it underground through the roots.

Though different from grazing systems, vegetable farms, too, have a role to play in regenerative agriculture. Soil is the foundation of both organic and regenerative systems. To retain this fundamental building block, the regenerative vegetable farmer’s main goals must be reducing soil loss and increasing organic matter.

Practical ways to reduce soil loss and keep the soil covered include:

Cover cropping. Cover crops help reduce erosion and loss of nitrogen to the air while increasing organic matter. Some crops, like clover, field peas and vetch also add nitrogen while roots break up compacted soil. And like the grasses in a pasture, as cover crops grow they pull carbon into the soil through their roots. When incorporating cover crops into the soil, switch from tilling to mowing and harrowing the crops in order to decrease the disruption of soil structure and the release of soil carbon.

Sown pathways. Pathways can leave soil exposed. Seed them in annual rye for a green pathway that requires minimal maintenance, smothers weeds, and increases organic matter. Straw or leaf mulch in pathways and on beds helps retain moisture and increase nutrients in the soil. As they break down, they will also add organic matter. Landscape fabric or plastic mulch helps retain moisture and cover the soil, and may be a more time efficient option for larger farms.

Plan successions. Careful planning can decrease the time between crop successions. When transplanting, aim to pull one crop and plant another in the same day, both increasing your overall yield potential and decreasing the amount of time soil is left exposed.

A harder practice to implement on organic vegetable farms is no-till. Tilling has traditionally been one of the organic farmer’s main ways to suppress weeds and incorporate plant residues. Though it achieves these means, it does so at a cost to the soil structure, leaving soil workable but without the structural integrity that increases its ability to retain water in times of drought and resist erosion in times of heavy rainfall or flood; most critically, tilling also releases carbon from the soil. No-till production methods help keep carbon sequestered and build organic matter at the same time.

For small farms, the transition to no-till can include these practices:

Permanent bed system. Using a permanent bed system, the soil structure remains intact all season long. Consistent cultivation is important for weed management; on the upside, weed seeds are not brought up to the surface as they are during tilling. Over time, weed pressure may decrease using this management technique. Permanent bed systems work well with the use of plastic mulch or landscape fabric, which take away the need for cultivation.

Sheet composting to build soil and open new space. This method of opening space requires the right timing and a willingness to prep fields without the use of a tractor, but can work well with permanent bed systems. In the fall, layer cardboard, compost, and leaves or straw. That’s it—the cardboard will begin to breakdown through the winter, and the space will be ready for planting come spring or early summer. This prep can be done on specific beds to increase soil organic matter, or can be done over a larger area to create a new growing space for the following season.

Broadforking to loosen and aerate soil. At Good Heart Farmstead, the broadfork is our most important tool, as every bed is broadforked before planting. The broadfork allows you to loosen the soil without inverting it, thereby keeping the soil structure intact. This subsequently increases the soil’s ability to absorb and hold moisture, increasing resilience in both drought and flood.

Soil Solarization. Prep beds for new successions by cleaning out the old crop (either by flail-mowing or hand-pulling) and laying clear plastic over the bed(s). This heats up the soil, killing weed seeds and pathogens, and prepares the bed for a direct-seeded crop. At Good Heart, we use clear plastic when we want to turn a bed over quickly, mowing the previous crop and laying the plastic down on a sunny day, letting it heat the soil for 24-36 hours to increase the soil temperature to 85º in the first 2-3”. We then pull up the plastic, rake off the residue and direct-seed. Alternatively, in the springtime when we want to prepare space in advance, we’ll lay a silage tarp instead of clear plastic. This is most effective when left on for 4-6 weeks, giving time for weed seeds to germinate and die off, the soil temperature to increase, and to keep the soil covered until planting time arrives.

Use compost to prepare beds for direct seeding. In place of tilling, rake a 1” layer of compost over the bed for a uniform, flat seeding area. This will increase your compost use, but it will also improve your soil (on our farm, we’ve found it helps with uniform germination as well). As with all inputs, it’s wise to take a soil test each year to be sure your compost levels are appropriate. 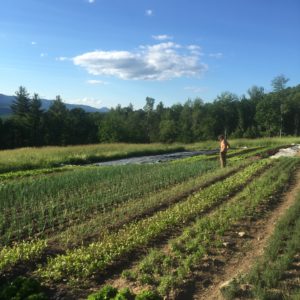 Black plastic mulch, seen in the far corner of the field in this picture, is used to solarize the soil in preparation for planting.

At Good Heart Farmstead, we’ve swapped raking with running a power harrow on a BCS walk-behind tractor over the beds to increase efficiency. When transitioning a bed from one crop to another, our standard preparation is: flail mow, broadfork, spread compost, harrow, seed. Unlike a tiller, the power harrow works horizontally on the top inch of soil, creating an even, flat space without mixing soil layers. A tilther, which works only the top 2 inches of soil, is another option used on low-till farms.

While some refer to Regenerative Agriculture as “beyond organic”, to me it harkens back to the foundation of organic farming: living soils and farming practices that enhance the health of land and people.