Plants are vigorous and productive, yielding large 20-25 lb pumpkins that are ideal for jack-o-lanterns. Fruit are nearly perfectly uniform, making this an excellent option for commercial producers growing for the decorative pumpkin market. Strong stems that dry well give each fruit a sturdy handle for ease of transportation. From our partners at Vitalis Seeds. 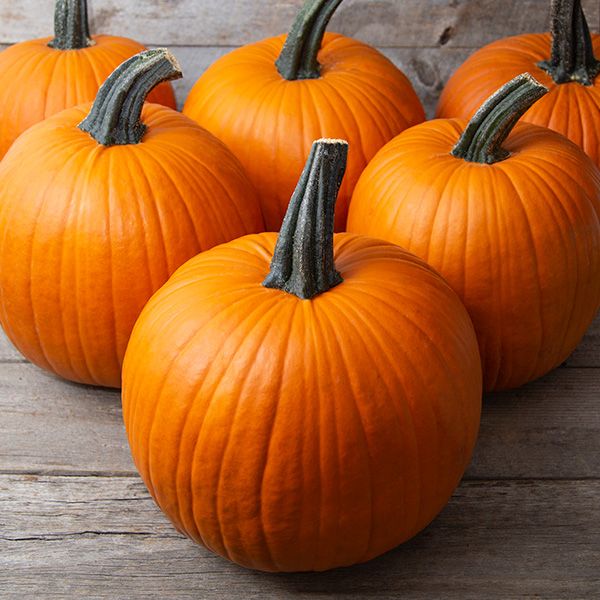 Pumpkins grow best in fertile, well-drained soil, with pH between 5.8-6.8. Sidedressing is recommended one week after blossoming and again 3 weeks later, especially if there are signs of deficiency. Nitrogen deficiencies cause yellowing, and bronze leaves are a sign of potassium deficiency.

For bush varieties 18”, for vining 24-36”. Tighter plant spacing will result in yields of smaller, but more numerous, fruit.

Row spacing: for bush/semi-bush and short vine types 6’, for vigorous vining types use 9-12’.

Days to maturity are from direct seeding, subtract 2 weeks if transplanting. Seeds can be direct seeded after danger of frost has passed and soil temperature has reached 70°F. Start transplants indoors 3-4 weeks before last risk of frost. Optimal soil temperature for germination is 85-95°F.

Black plastic mulch and floating row cover can also be used to increase soil and air temperature, as well as ward off cucumber beetles which eat young seedlings and spread disease. Remove row cover when flowers open to allow for insect pollination.

Harvest by cutting stem near vine or at least 2-3” from fruit. Too many days of sun on fruits after maturity will bleach handles and cause sun scald on the fruit.

A short or broken stem can lead to rot. Cure after harvest by keeping in a warm, dry location for a few days then store at 50-55°F with 55-75% relative humidity and good air circulation.  Delicata and acorn squash do not need curing, but will not store as long as other varieties.