Firm, 1" diameter cukes are great for pickling with excellent eating quality. Consistently the earliest, most productive cuke in our trials with an impressive disease resistance package! Vigorous gynoecious plants set only female flowers; Marketmore 76 is included for pollination. 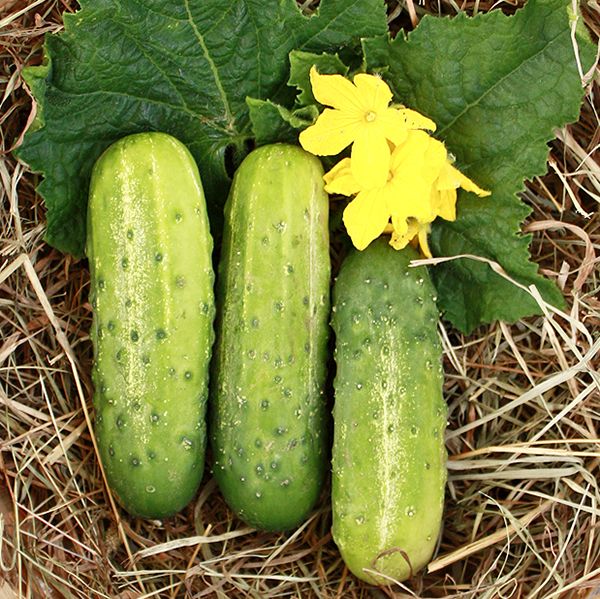 Cucumbers (Cucumis sativus) are a warm season tender annual in the Cucurbitaceae family, which includes melons, summer squash and winter squash, and gourds. Cucumbers have a variety of shapes, sizes and uses:

We provide a complimentary packet of the monoecious variety Marketmore 76 with all of our Calypso F1 cucumber seeds for this reason. To use this seed as a pollenizer for your Calypso F1 cucumber plants, sow approximately 10-12% of your crop with Marketmore 76 plants, roughly evenly interspersed with the Calypso F1 plants. Using this ratio will ensure that the optimal proportion of male to female flowers is present, resulting in good pollination and high fruit yields. For example, a bed planned for 200 plants should include 176-180 Calypso F1 plants and be inter-planted with 20-24 Marketmore 76 plants.

Cucumbers prefer well drained fertile soil high in organic matter with neutral pH. Cucumbers are heavy feeders. Sidedressing is recommended one week after blossoming and again 3 weeks later, especially if there are signs of deficiency. Nitrogen deficiencies cause yellowing, and bronze leaves are a sign of potassium deficiency.

Row spacing: for slicing and greenhouse cukes 5-6’, for pickling cukes 3-6’.

Cucumbers can be direct seeded or transplanted one week after all danger of frost has passed. Start transplants 3-4 weeks before planting date. Plants with one or two true leaves transplant best. Optimal soil temperature for germination is 85°F. Soil temperatures below 50°F slow growth and impair water uptake by roots. Cucumbers prefer an air temperature of at least 70°F during the day, 60°F at night. Plastic mulch and row covers are commonly used for field cucumbers to increase soil and air temperature and ward off insects. Make sure to remove row covers when plants begin to flower to ensure pollination.

Once plants begin to bear, it is important to harvest every day or two. Plants carrying overripe fruit will slow production.

Cucumbers store well for up to 7-10 days at 50-55°F with 95% relative humidity and can become injured at temperatures lower than 50°F. Thin skinned cucumbers are best stored wrapped in plastic.