One of the best-known Maine potatoes and a North American standard, Katahdin is prized for its adaptability, consistent performance and waxy flesh that is delicious boiled or in potato salad. The gold standard of storage potatoes! High yielding, adaptable big plants. Shows moderate resistance to scab. 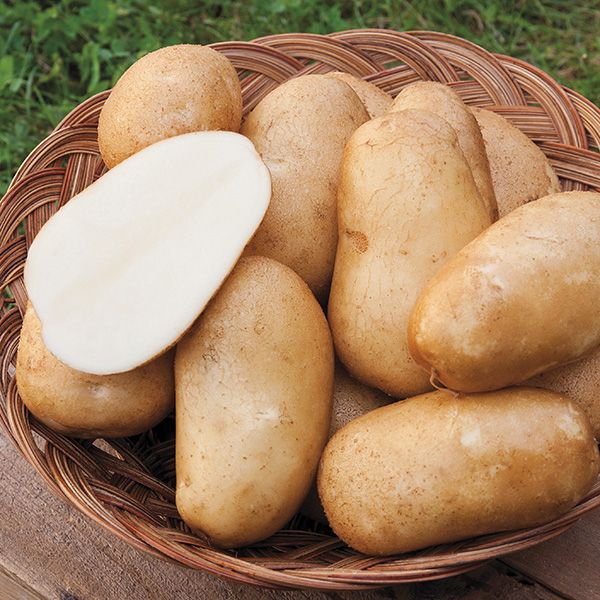 Potatoes (Solanum tuberosum)are a hardy cool season crop in the the Solanaceae family which includes peppers, tomatoes, tomatillos, eggplant and ground cherries. They are classified by early, mid, and late season varieties, which refers to the days to maturity.

Loose, deep, well drained soil on the acidic side (pH 4.8-5.5) will grow the best potatoes. Avoid heavy nitrogen applications, as this can lead to abundant foliage but lower quality tubers that mature later. 140-150 lbs of nitrogen/acre is average.

Potatoes can be planted 1-2 weeks before the last frost date in spring. Small potatoes (1-1.5” diameter) can be planted whole or larger potatoes can be cut into pieces. Each piece of the tuber should have at least one eye (dormant bud). Cut the tubers a day early in order for the skin to dry before planting. Sprouts appear in 2 weeks.

Potatoes should be left out in a dry dark place to cure. Store potatoes in burlap, boxes, or crates in a dark, moist area at 38- 40ºF.