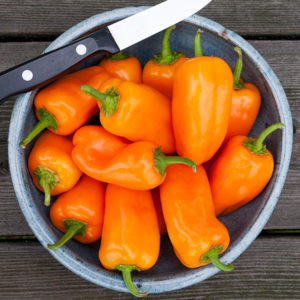 Dr. Jodi Lew-Smith first encountered miniature sweet peppers while grocery shopping in the South. It was several years ago, and the Breeding Coordinator was taken with the tiny snack veggie right away. When asked why she wanted to grow them for seed, her reply was immediate: “They taste amazing,” says Lew-Smith.

As the leader of High Mowing’s breeding program, Lew-Smith knows good flavor when she tastes it. High Mowing’s high priority trait to select for in breeding and trialing is flavor. The first little peppers that Lew-Smith tasted off the shelf in their plastic packaging certainly stood out for flavor, but more than that, they hit upon a unique trait that has been up-and-coming in the farm-to-table food market over the past few years: miniature vegetables. For High Mowing, developing a line of its own with standout flavor, color, and vigor was a no-brainer.

Lew-Smith chose to develop an open-pollinated variety. This means that her breeding process would involve selecting for desirable traits from pre-existing open-pollinated varieties to refine their characteristics. (Want to know the difference between open-pollinated and hybrid seed? Read our previous blog post to learn more.) She planted her first miniature pepper attempt with seeds from one of those grocery store peppers. When she cracked them open, she found that each had only 2-3 seeds per pepper.

This discovery was a set-back at first. “I thought, ‘This might not work. Growing these for seed would be highly inefficient,’” she remembers. As it turned out, she discovered that this first set of seeds (called a “germplasm” in the breeding world) was bred specifically for the low seed count trait and the trait was not inherent to all miniature peppers. Thankfully, High Mowing did not consider the low seed count trait a desirable characteristic. Lew-Smith gathered a second set of germplasm in three colors, red, yellow and orange from three seed sources and grew them to begin selecting desirable traits.

Since all the sets of germplasm were bursting with flavor, Lew-Smith focused on selecting for her other desirable traits: full, bright color; uniformity of size within each color, as well as uniformity of size across colors; plant performance; and days to maturity. The goal was to end up with a set of peppers in all three colors that would grow robust plants with fruit that matured at roughly the same rate and be uniformly sized with outstanding flavor and texture.

It turned out the hardest of these traits to finish were uniformity of size and days to maturity. The yellow pepper took longer to select for earliness, as it tended to mature much later than the other two colors. All three varieties showed a variance to each other in relation to fruit size.

“At some point in the breeding process,” explains Lew-Smith, “I needed feedback on my work.” This is when she brought in the help of High Mowing’s Trials Lead, Taylor Maida. The handoff of breeding work to the Trials team is an essential part of the product development process at High Mowing. Maida diligently records data from the trials plantings, which means that she is able to not only fully assess varieties on an individual basis, but also compares each new variety to market standards side-by-side.

Maida was able to work with Lew-Smith for the last two years of the development process, providing important feedback to refine the peppers into a marketable collection. There were a few standout traits that Maida identified as important to improve upon based on market standard miniature pepper collections. Among them were traits that proved successful in the finished products: uniformity of size across all three colors, and bigger fruits overall.

The red pepper was completed first, almost a full year ahead of the yellow and orange. The entire collection took six years to complete as a whole. When finished, both Lew-Smith and Maida were happy with the results. The final hurdle was naming the collection; the Production Development team settled on Picnic Peppers – their size, attractive color mix, and satisfying crunch fit perfectly with the image of a mid-summer picnic meal. 2017 is the first year these peppers will be commercially available to growers.